Reforms have been slow for too long - but things are changing. On this page we share a list of the key reforms and initiatives to prevent sexual assault of older women and we thank the organisations and groups who have demonstrated leadership.

Celebrate Ageing Ltd worked with Older Women's Network NSW to develop a submission on the SIRS for in-home aged care services. Our submission draws on lessons from SIRS in residential aged care and suggests these need to be addressed before SIRS is expanded to home services. We also raise the unique challenges that will be experienced in home based services. See submission by clicking the link: here

The #ReadyToListen is Australia's first National project building the skills and capacity of residential aged care service providers to better respond to and prevent the sexual assault in residential aged care. The project will deliver education and resources, including an aged care Leadership Course, supporting aged care service providers through the practical steps involved in creating change. The #ReadyToListen project has been funded by the Department of Health and is being delivered by the Older Person's Advocacy Network, in partnership with Celebrate Ageing and the Older Women's Network, New South Wales. The Project Coordinator, Dr Catherine Barrett, is the Director of Celebrate Ageing and long term advocate for prevention of the sexual assault of older women. More information here

The Royal Commission into Quality and Safety in Aged Care's Final Report 2021 (p. 150) noted that: the estimated number of alleged incidents of unlawful sexual contact in 2018-19 could be as high as 2520, or almost 50 per week. This is a disgrace and should be a source of national shame (report here). However there are no specific recommendations on sexual assault.

The Aged Care Royal Commission received 588 submissions mentioning sexual assault. In the Transcript of Proceedings for the Commission on 22nd October, 2020 (page 9681), Mr P. Rozen QC (counsel assisting the Royal Commission) noted: There were 426 allegations of sexual assault in residential aged care facilities reported to the Australian Department of Health in 2014-15 and that number of 426 increased to 790 in the year 2018-19. ...The increase in the reporting of allegations of assault was far greater than could be accounted for by the increase in the number of permanent residents over the same 45 time period. The rate of alleged assaults, that is the number of assaults per 100 residents, nearly doubled from 1.13 to 2.16 in that four-year period.

An announcement that the Serious Incident Report Scheme will include sexual assault by a person with a cognitive impairment. This is a significant step forward. Now - to use that data to shape strategies for prevention. Research by KPMG into the SIRS highlighted a number of issues. In the review of 178 residential aged care homes there was an estimate of 1730 incidents of sexual assault nationally. It is worth noting that staff were asked to rate the impact of the incidents on residents and 58% said the sexual assault had no impact on the victim.

​Compass hosted a webinar with Dr Catherine Barrett (OPAL Institute), Yumi Lee (Older Women’s Network NSW) and Kerrin Bradfield (Gold Coast Centre Against Sexual Violence). The moderator of the webinar was journalist Caroline Baum. Compass is a national website navigating elder abuse in Australia. It aims to create a national focus on elder abuse by raising awareness of this growing social issue and to simplify the process of connecting people to services and information. Compass has been create by Elder Abuse Action Australia (EAAA), with funding from the Australian Government Attorney-General’s Department. ​

On International Day for the Elimination of Violence Against Women (Nov 25th), Senator Rachel Siewert hosted a Round Table on Preventing the Sexual Assault of Older Women at Home and in Care.
Thankyou to Senator Rachel Siewert for raising this issue in Federal Parliament a few days later (see link to Hansard below) and to the media who covered the event.

On November 25th, the Power Project launched the #InHerShoes project, a collaboration with the Older Women's Network of NSW to document older women and their family members experiences of report. Link here

Prior to the AAG Conference in Sydney in 2019, the OPAL Institute will be presenting a preconference workshop on Unlawful Sexual Contact - compliance, resourcing and prevention. We are pleased to announced that Ann Wunsch, Executive Director of Quality Assessment and Monitoring Operations at the Aged Care Quality and Safety Commission in Australia will copresent. More about the conference here.

The Royal Commission into Quality and Safety in Aged Care released its interim report, called Neglect. There were no references to sexual assault in the report. In response, Women's Safety NSW partnered with the Older Women's Network NSW and Celebrate Ageing to launch a 'do gooder' letter writing campaign - and 375 people sent email to the Royal Commission asking that sexual assault be addressed. 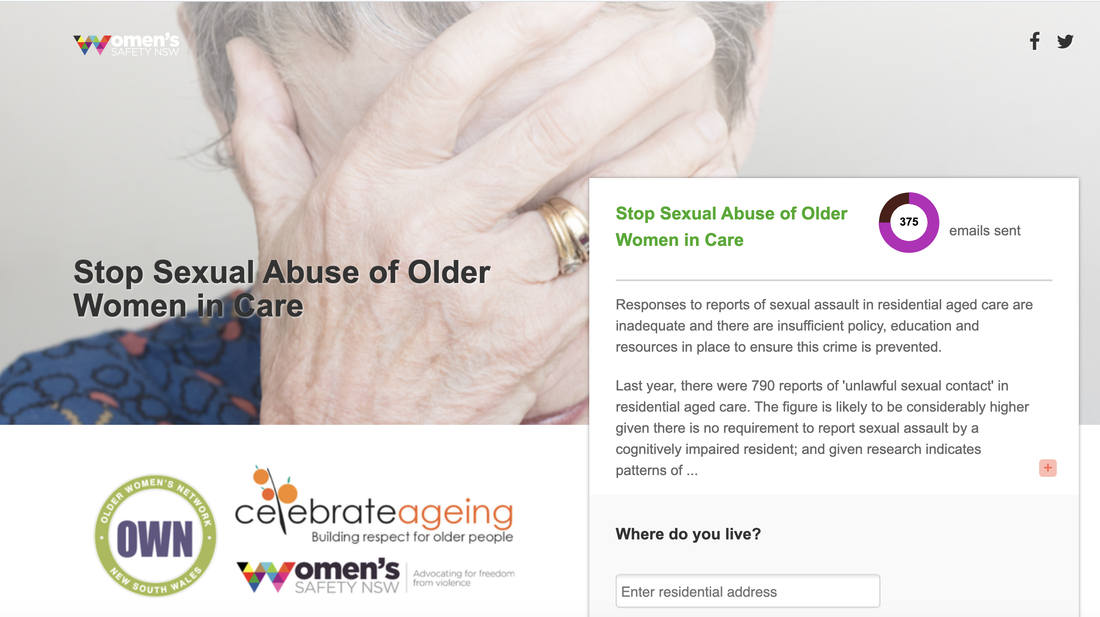 The October edition of the Australian Journal of Dementia Care included a feature on listening to older women who experience sexual abuse. It focused particularly on sexual abuse and dementia. Its time to resource service providers to prevent the sexual abuse of older women with dementia. Read article by clicking the link here.

Seniors Rights Service hosted two forums in November 2018 with Ellen Fanning on Women, Ageing and Disadvantage. The OPAL Institute will be participating to share the perspective on older women and sexual abuse. The forums ask: 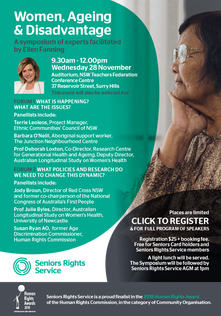 Congratulation to Daisy Smith, Lyndal Bugeja, Nicola Cunningham and Joe Ibrahim ​on the publication of your research on older women who are sexually abused in residential aged care. Copy of the literature review here and research here. OPAL Institute is also pleased to be presenting at the Institute's Seminar on preventing sexual violence in residential aged care. Link here.

The 2019 Elder Abuse Conference in Brisbane will include a plenary presentation by 97 year old Margarita Solis - thank you to ADA Australia and Caxton Legal Centre Inc for creating space for us all to learn from Margarita. More about the conference here and more about Margarita here. 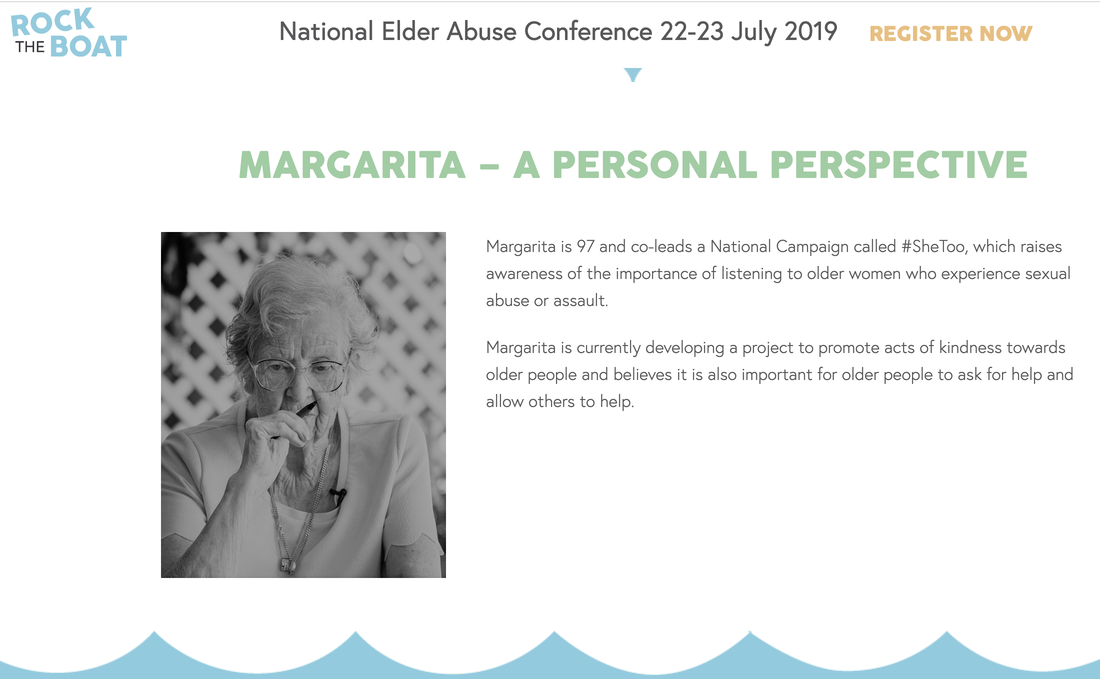 Di MacLeod and the team at The Gold Coast Centre Against Sexual Violence are one of a very small number of organisations that have been actively working to prevent sexual violence of older women for years. Pleased to see these workshops launched for Queensland. 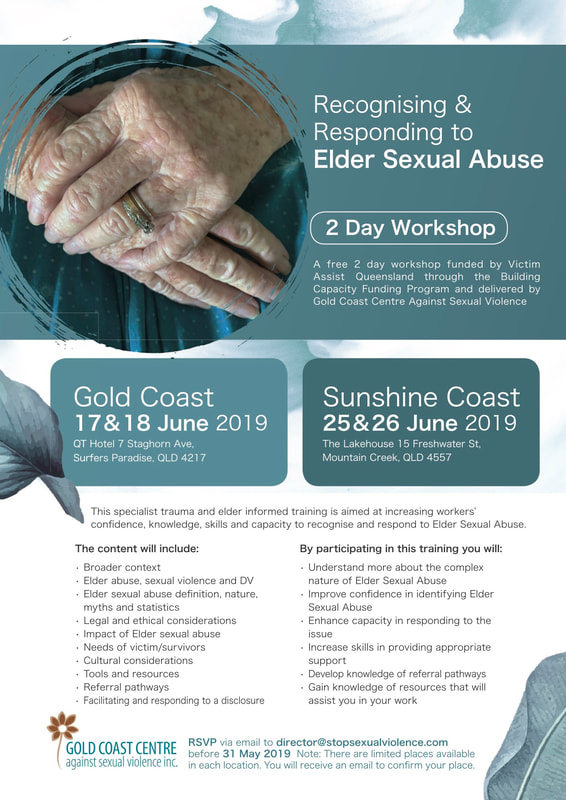 In April2019 the ABC (Australian Broadcasting Commission) ran a series of print, radio and TV stories focused on the important of preventing sexual abuse/assault of older women. Particular thanks to journalist Anne Connolly for focusing light on the importance of change and to Ellen Fanning and the team from The Drum.

The Australian Association of Gerontology hosted a workshop on sexual abuse of older women, prior to their annual conference in November. The workshop explored how we can create a fair future for older women who experience sexual abuse. Thank you to the experts and participants (below) who contributed to a fabulous workshop and a powerful report: link here 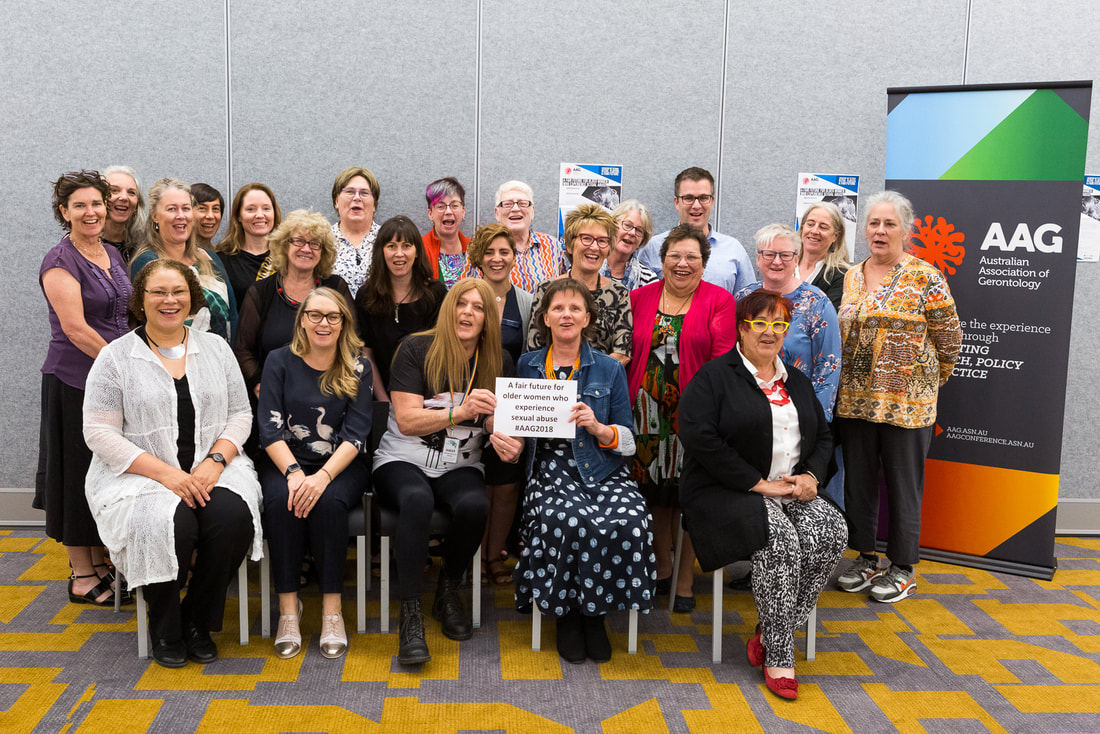 The team at the Department of Forensic Medicine, Monash University published a systematic review on sexual assault in residential aged care. Link here

Thank you to Senior's Rights Service in New South Wales who hosted Australia's first interdisciplinary panel on preventing the sexual abuse of older women at their National Elder Abuse Prevention Conference in Sydney in 2018. This is an important step in raising awareness of the need to include sexual abuse in strategies to prevent Elder Abuse. After the panel we will invite delegates to share their commitment to the Campaign slogan: #itstime to listen to older women who report sexual abuse.

​You can watch the one hour video of the panel and see the interview with Ellen Fanning below.

This project involved interviews and a survey of aged care service providers in Victoria to document their strategies for preventing the sexual assault of older women. Data on 'good practice' formed the basis of a resource for the education of service providers about real strategies for change. The project was conducted by the Council on the Ageing (COTA) Victoria and the  Australian Research Centre in Sex, Health and Society at La Trobe University and was funded by the Victorian Women's Benevolent Trust. Resources included:

Norma's Project is Australia's first project focusing on primary prevention of the sexual assault of older women. Interviews and surveys involved over 95 people and documented 65 stories about the sexual assault of older women. The project was funded by the Australian Department of Social Services and conducted by the ARCSHS at La Trobe University in partnership with the National Ageing Research Institute; the University of Melbourne, Alzheimer’s Australia and the Council on the Ageing, Victoria. Resources included:

Information about the sexual assault of older women and men is difficult to come by as most resources focus on physical, emotional or financial abuse. In 2012 SECASA, in conjunction with Medical students from Monash University’s’ Community Based Project, undertook research and created some resources on this topic. This collection contains the most relevant data the students found.It also has the three fact sheets that were created by the project, one for victim/survivors, one for carers and one for workers. There is also a powerpoint and audio recording of the presentation of their findings.It is hoped this collection will be added to over time.

The Gold Coast Centre Against Sexual Violence has been working to raise awareness of older women's experiences of sexual abuse for well over a decade. Well done Di MacLeod and team. The Centre developed a flyer promoting their services to older women - it is so important to give older women permission to talk about their experiences