The estimated number of alleged incidents of unlawful sexual contact in 2018-19 could be as high as 2520, or almost 50 per week. This is a disgrace and should be a source of national shame.
(The Royal Commission into Quality and Safety in Aged Care, Final Report 2021, p. 150)

Royal Commission into Quality and Safety in Aged Care

The Royal Commission into Aged Care Quality and Safety was established on 8 October 2018 and required and authorised to inquire into the following matters:

The Aged Care Royal Commission received 588 submissions mentioning sexual assault. In the Transcript of Proceedings for the Commission on 22nd October, 2020 (page 9681) the following quote was made by Mr P. Rozen QC, counsel assisting the Royal Commission:

"The Royal Commission itself received 588 submissions mentioning sexual assault. There were 426 allegations of sexual assault in residential aged care facilities reported to the Australian Department of Health in 2014-15 and that number of 426 increased to 790 in the year 2018-19. Commissioners, that is more than two reports per day of sexual assault on average, every day of the year. The increase in the reporting of allegations of assault was far greater than could be accounted for by the increase in the number of permanent residents over the same 45 time period. The rate of alleged assaults, that is the number of assaults per 100 residents, nearly doubled from 1.13 to 2.16 in that four-year period."

The Royal Commission into Aged Care Quality and Safety’s Interim Report was launched in October 2019 and is entitled Neglect. The Commission found the aged care system fails to meet the needs of its older, vulnerable, citizens. It does not deliver uniformly safe and quality care, is unkind and uncaring towards older people and, in too many instances, it neglects them. The report does not include any findings related to sexual assault.

Following the release of the Interim report, the Older Women's Network NSW launched an online petition, calling on the Aged Care Royal Commission to address the issue of sexual assault in their final report. The petition has over 11,000 signatures and includes the following message: ​ 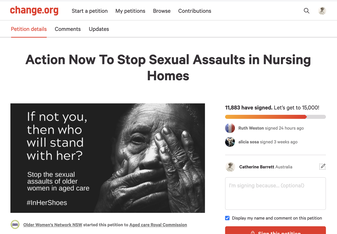 We want the sexual assaults of older women in aged care to stop. There were almost 550 reports of ‘unwanted sexual contact’ in residential aged care in the past year. However, this is just the tip of the iceberg because there is no requirement to report certain types of sexual assaults. Older women in residential aged care and at home are subject to repeated sexual assaults unless action is taken now. Older women in nursing homes are vulnerable to sexual assaults because they are not believed. This means that no investigation is carried out, and no steps put in place to protect the older women from further attacks. This situation is unacceptable and a violation of their human rights. We call on the Aged Care Royal Commission to investigate this issue so that clear processes and systems can be put in place to deal with the reporting and responses to reporting. Measures must also be taken to support the victims and their families. Please sign the petition to protect older women and to stop the sexual assaults from happening. We need to bring this issue to the forefront because sexual assaults happen to women of all ages. Older women deserve to be protected and to be provided with assistance and support when they report these cases.

The Royal Commission's Final report was released in February 2020 and, as highlighted in the quote at the top of the page, calls out sexual assault as a 'national disgrace'. There are numerous references to sexual assault throughout the report and we have highlighted them in a table here, or click on the image below. A very big thankyou to Fiona Ninnes for developing this resource.

Celebrate Ageing and the OPAL Institute were pleased to partner with the Older Women's Network NSW to lobby the Aged Care Quality and Safety Commission to address the sexual assault of older women in aged care and at home.