The small body of evidence on the sexual abuse of older women in Australia will be shared on this page. We hope over time this section of the website will grow.

Royal Commission into Quality and Safety in Aged Care

The Royal Commission is calling for submissions and we have written one on sexual abuse/assault of older women. Please click the link here or image below. 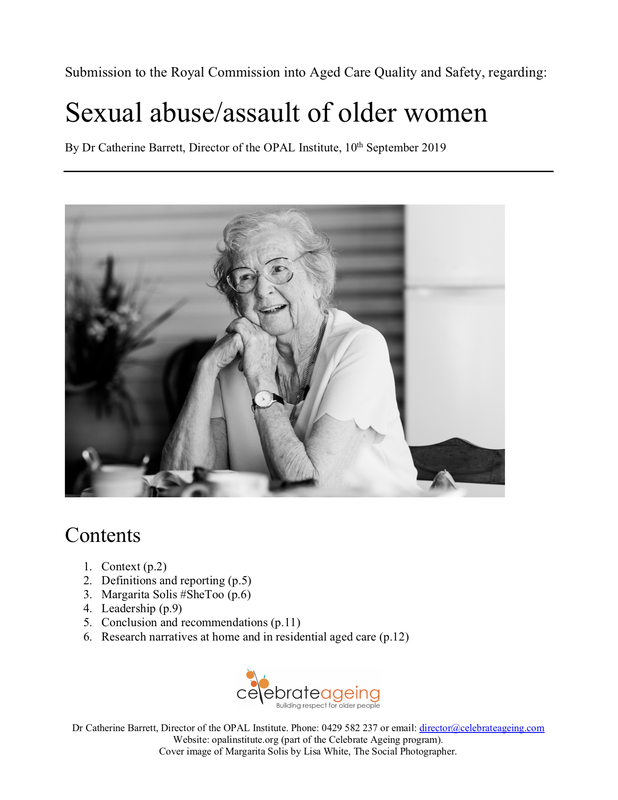 The difference between sexual abuse and sexual assault is lies in the relationship between older women and the perpetrator. The term sexual abuse generally refers to sexual violence perpetrated by a family member or known service providers. Sexual assault (rape) by a stranger is much less common. This point was articulated powerfully in a recent article by Tom Meagher and is such important reading for anyone working to prevent sexual abuse of older women.

Special thanks to Senior's Rights Service, New South Wales for providing the video of this one hour panel on Preventing The Sexual Abuse of Older Women from the National Elder Abuse Conference 2018. You can watch the video and an interview with Ellen Fanning below.

Norma's Project is Australia's first project focusing on primary prevention of the sexual assault of older women. Interviews and surveys involved over 95 people and documented 65 stories about the sexual assault of older women. The project was funded by the Australian Department of Social Services and conducted by the ARCSHS at La Trobe University in partnership with the National Ageing Research Institute; the University of Melbourne, Alzheimer’s Australia and the Council on the Ageing, Victoria. Resources included:

Older women's right to be safe at home and in care

This project involved interviews and a survey of aged care service providers in Victoria to document their strategies for preventing the sexual assault of older women. Data on 'good practice' formed the basis of a resource for the education of service providers about real strategies for change. The project was conducted by the Council on the Ageing (COTA) Victoria and the  Australian Research Centre in Sex, Health and Society at La Trobe University and was funded by the Victorian Women's Benevolent Trust. Resources included:

This looks like a useful from the USA - tools for advocates who are working with older survivors of sexual abuse. It includes a report and video. Link here

There is growing recognition about the ways in which trans women experience sexual abuse. Loree Cook-Daniels and Michael Munson from the TransGender Ageing Network in the USA have published a paper on their research.

The South East Centre Against Sexual Assault has developed a number of resources relating to older people who have experienced sexual assault. You can access them by clicking here